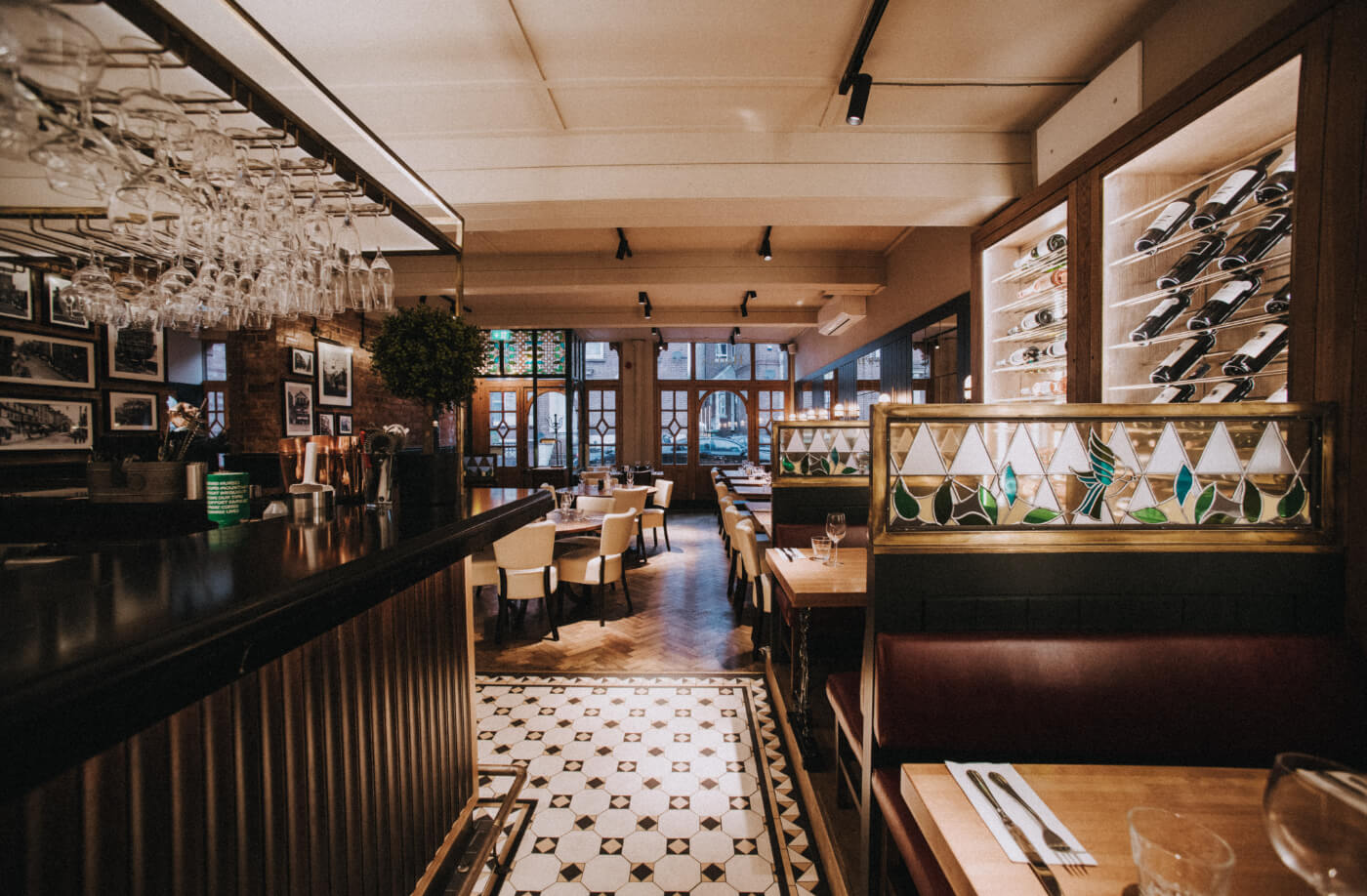 We discover where to eat and shop in Exeter, Devon

The historic city of Exeter – known to the Roman’s as Isca Dumnoniorum – is widely acknowledged as Devon’s cultural capital (we won’t tell Plymouth if you don’t). From its twisted cobbled streets to its picturesque quayside, there’s a myriad of independent businesses and landmarks to explore…

During your visit, take the rare opportunity to explore one of England’s greatest cathedrals and one the finest examples of Gothic architecture in the world. Founded in 1050 AD, construction of a cathedral on the present site began as early as 1114. Inside, Exeter Cathedral’s impressive vaulted ceiling is a sight to behold, but to truly appreciate its magnificence you should opt for a rooftop tour – the views over the city are spectacular.

Multi-disciplinary art venue ‘The Phoenix Centre’ connects filmmakers, dancers, DJs, drag performers, musicians and anyone interested in creativity in their hub behind Gandy Street. Pop in for a pint in their bar or terrace before catching live shows, comedy or arthouse films.

Whether you’ve got kids in tow or you’re just young at heart, RAMM is fun for the whole family. This world-class museum tells the story of Exeter and Devon from the prehistoric era to the present, along with interactive exhibits and a beautifully curated gift shop. On a rainy day this should be your first stop!

This microbrewery and tap house is one of the hottest spots for music in town. On summer nights, you can take a seat on the historic quayside and listen to live performances under the twinkling lights, with a craft beer in hand. 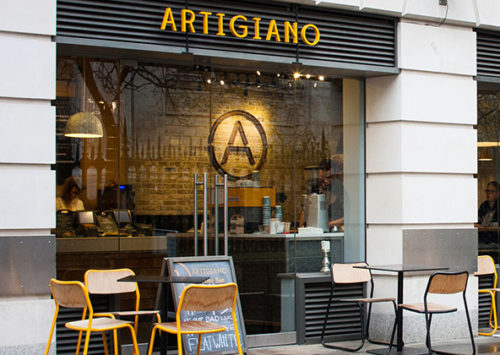 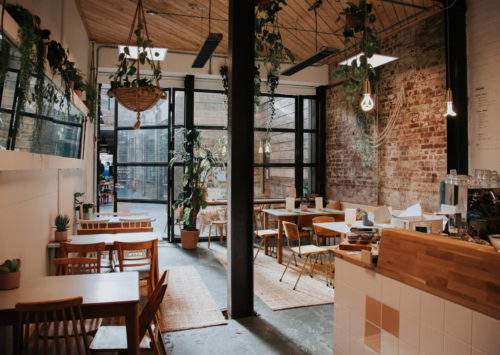 Look out for this monthly gathering of local artisans, selling everything from handmade ceramics to macrame. wall hangings. For details of their next event keep your eye on social media.

From the hands that nurtured Exeter indie shop ‘No Guts No Glory’ comes plant-based cafe. and brunch spot Sacred Grounds. Tuck into crispy waffles and vegan wraps, order a calming beetroot latte or an iced americano and spend your morning in the warm, light atrium of McCoy’s Arcade. Look out for their regular live music sessions and feast nights as well!

By day Artigiano serves an extensive coffee menu of flat whites and dirty chai lattes. But come evening this trendy coffee house is transformed into a stylish bar space where you can sip on cocktails and catch live music performances.

The star of Grow is its sheltered outdoor decking area. Or maybe it’s their coffee. Or perhaps it’s their eco-friendly ethos? We can’t actually decide! What we do know is that it’s a bright and friendly spot to enjoy Devon roasted coffee and a pastry. Also attached to Grow is music shop Life Guitars Co. who lovingly revamp second-hand guitars back to glory. 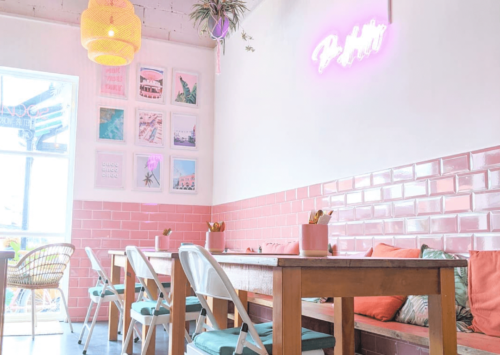 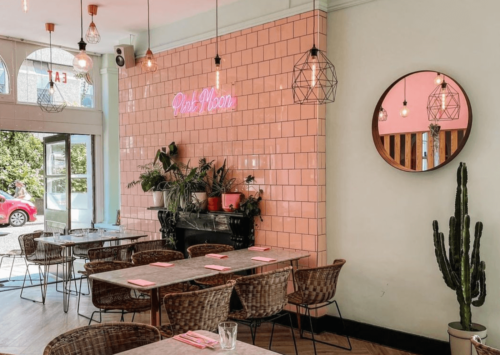 This Californian-inspired venue is seriously Instagrammable. Self-described as a ‘Grab ‘N’ Go caf., modern brunch space & social restaurant’, Pink Moon is decked out with pastel pink walls, neon signage and white marble floors. There’s an entire segment of their brunch menu devoted to how you like your eggs, as well as six different varieties of dirty fries on the all-day menu.

This intimate basement wine bar is one of Exeter’s best kept secrets. There’s an exceptional wine list featuring over 60 suggestions from across the globe – as well as famous champagnes and local spirits – and an ever-changing menu of west country fare. Plus, in the summer months there’s a peaceful, secluded garden to enjoy.

Red Panda rustle up big, Asian street food flavours on Exeter’s Gandy Street. Think fluffy bao buns and aromatic belly pork, made using fresh south west ingredients. Colourful dishes respect vegetables and give a kick to the tastebuds. You can also take home a jar of their crispy chilli sauce to recreate the magic at home (trust us, once you’ve tried it you’ll be hooked). 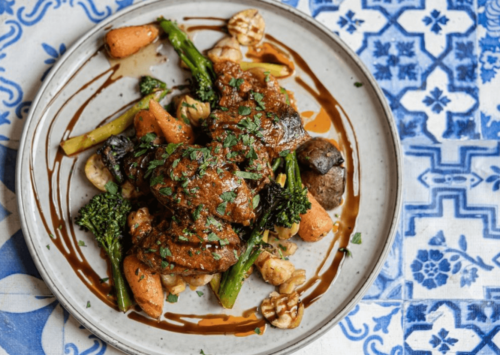 Also tucked away on Gandy Street is The Cork and Tile. Serving up Portuguese cuisine and tapas, you can expect a sizeable menu of bite-sized dishes and authentic fare. All bases are covered, from crispy cod fritters to traditional Portuguese stews.

Harry’s Restaurant is a stalwart of the Exeter foodie landscape. Established in 1993 by the Pounds family, this relaxed but beautifully outfitted restaurant has earned itself a glowing reputation. Between gourmet burgers and flat iron steaks, laidback brunches and a cookie dough dessert that’s to die for, there really is something for everyone.

For a taste of Morocco, look no further than Al Farid. Overlooking Exeter’s Cathedral Green, this laidback restaurant is lit by geomatic lanterns and festooned with colourful textiles. They offer the best meze around, alongside tempting tagines and shish platters – all washed down with authentic teas and traditional cocktails.

As the name suggests, this chilled out restaurant occupies an enviable waterside spot on Exeter Quay, overlooking the River Exe. It’s ‘go big or go home’ when it comes to their famous 16-inch, dustbin lid pizzas. We’re fans of the ‘Crispy Duck’ topping, but chilli heads need to try the ‘Fiery Inferno’ pizza. 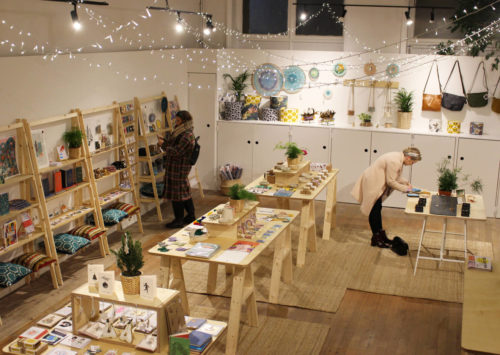 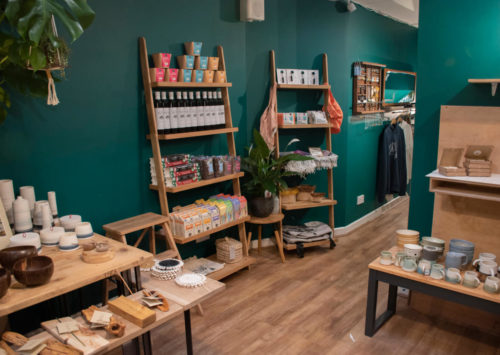 Love plants? Do yourself a favour and drop into Hutch. Lush greenery bursts out from every corner and drips in strings from the ceiling. Purchase a leafy pal to improve the air quality of your home and add colour to a space – be it a stylish succulent, a fluffylooking fern or a spiky cactus. Owners Rob and Frankie are real houseplant aficionados and are on hand to impart their expert advice.

Hammered silver jewellery, fiery precious stones, and quirky charms embellish the plush cushioned stands of Silver Lion Jewellers. Specialists in 9ct gold jewellery and unique pieces of silver, the shop offers a large selection of adornments that can be tailored to the wearer.

NO GUTS NO GLORY

Get your fix of houseplants, art prints and ceramics at this slick homeware shop on Exeter’s Fore Street. Run by self-certified plant addicts, Alex and Martha, everything these guys sell is independently made, grown and built to last.

Head down a set of stairs into this trendy basement space for a showcase of the very best designer makers from Devon and beyond. These guys are passionate about supporting local products and crafts, so expect a fabulously curated selection of wares on sale, from quirky gift cards to macrame decorations and handmade jewellery.

For more ideas for things to see and do in Devon, grab a copy of The Maverick Guide to Devon Vol 1 from our shop. Feature image: Exeter Gandy Street by Max_555 / Shutterstock

Today is your last chance to grab our Devon & Corn

We can never quite believe just how beautiful Tres

Next time you visit the coastal village of #Mevagi