A Guide To Devon Folklore

With its imposing tors and wild woodland, Dartmoor is as breathtaking as it is vast and unknowable. For centuries it has inspired writers and artists with its tales of ghostly apparitions, witches, and curious happenings. Here are a few of our favourite local legends…

Throughout Devon and Cornwall stories of fairies have endured for centuries. These tiny creatures are rumoured to be seen only in the twinkling of an eye, or between one blink and the next. They’re highly elusive creatures, who are fiercely protective of their privacy, and have been known to blind those who spy on them.

All different kinds of fairy feature in British folklore, from the grotesque Spriggans native to Cornwall, to the beautiful Fairy Aristocrats described in fifteenth century ballads. Most descriptions of fairies depict them as fair little people, who are well-proportioned and imagined in clothes that mimic the natural landscape. While some fairies are said to have dainty little wings, most rely on magic incantations to fly or ride on ragwort stalks. Mischievous by nature, even the most innocent looking fairy is said to be dangerous. So, if you happen upon the fae when hiking on the moors, be careful to watch your step!

Speak of the Devil

Sightings of the Devil are remarkably common on Dartmoor; though accounts claim that he often appears in the guise of a huntsman or an evil rider.

A particularly well known account is tied to a historic thunderstorm that devastated Widdecombe Church on Sunday 21st October, 1638. The story starts in the small village of Poundsgate. That morning, church-dodging folk were busy exchanging stories and sinking tankards of ale at The Tavistock Inn. Suddenly, an eerie silence fell over the surrounding countryside and the clattering of hooves on cobbles could be heard approaching the inn.

A feeling of unease washed over the patrons as a tall figure, shrouded in dark robes and seated upon a high horse, approached the inn. As the figure came to a stop, the locals did not recognise the shadowy stranger, whose jet-black steed snorted and pounded the ground impatiently. From under the shadowy hood emerged a voice like nails on a chalkboard: “Fetch me a flagon of cider,” it demanded. “Quickly, for I have a terrible thirst.”

With shaking hands the landlady delivered his order, which he seized from her, before throwing two silver coins at her feet. He drained the tankard with a long, hissing gulp before tossing it aside and riding off again on the Widecombe road.

Shortly after, the rider arrived at Widecombe Church. Here he rode onto the roof and tethered his steed to the pinnacle tower. The local congregation were already inside, and peering through a gap in the ceiling, he spied a young boy asleep in the back row. It was common knowledge that those who fell asleep in church could fall into the hands of evil. So the rider – who had been the Devil all along – seized his opportunity and swooped on the boy. Seizing him by his neck, he dragged the child from his pew and flung him across the saddle of his horse. In his haste to ride off with his prey, the devil broke the pinnacle of the tower, which came thundering down onto the remaining congregation. Thankfully, no one was killed; but many people were injured and the boy was never seen again…

Back in Poundsgate, the locals heard the rider pass again. This time they had drawn the windows tightly shut and held a collective breath as he went by. Only when the sound of hooves was gone did they breathe a sigh of relief and dare to look outside. Calm had returned to the moors, but when the landlady glanced at the silver coins the horseman had given her, she discovered that they had been transformed into withered leaves.

“It must have been the pixies who did this,” she said. “It was an act of kindness. They knew this money was evil and so they changed it”. 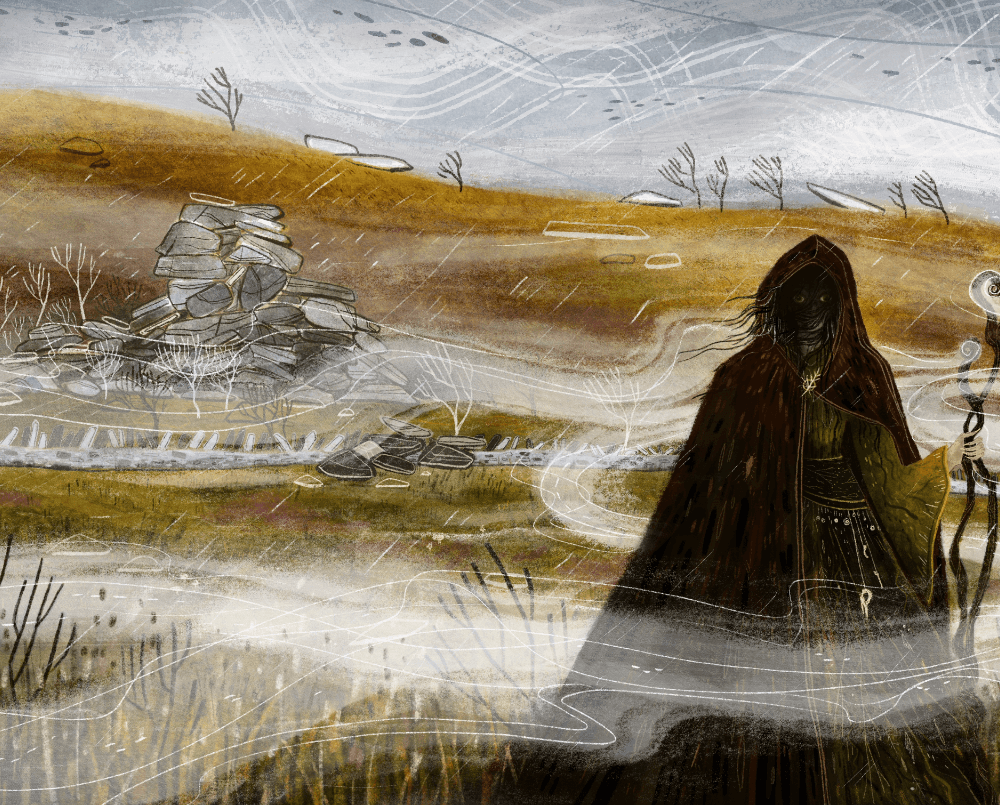 Somewhere between Tavistock and Princetown, you’ll come across a particularly unusual tor that bears an uncanny resemblance to a woman’s head. Vixen Tor – also known as Sphinx Tor – is a stony formation shrouded in mystery. Many centuries ago, the landmark was allegedly home to a witch named ‘Vixana’, who lived alone in a dark and cavernous cave at the base of the tor.

Vixana had an evil reputation among the locals, not least because of her terrifying appearance. She was said to have been taller than most men and as thin as a rake. The witch’s long black hair hung down around her knees and her pale, sallow skin was drawn tight over her bones. As a malevolent soul, Vixana would take pleasure from the suffering of others and within her magical repertoire was the ability to conjure up a thick fog to trap anyone who would pass by her home.

Each day, Vixana would climb to the top of her tor and survey the boggy landscape for potential victims. When a lost traveller wandered too closely to her lair, she
would summon the eerie fog and watch as they lost sight of their path. The most unfortunate among them would stumble into a deep, syrupy bog, and sink beneath the surface with the evil cackling of Vixana ringing in their ears.

But not all accounts of Vixana are so damning. During the Bronze Age, men buried their dead in the shadow of the Vixen Tor, making it a place of sacred significance. An alternative legend paints Vixana as a benevolent spirit who keeps watch over the land and the dead. In such accounts, the beautiful Vixana can take the form of a striking red vixen – which makes sense when you realise that foxes have always been considered creatures of the underworld, who spend their winters sheltering beneath the ground in earth dens. Dubbed ‘The Mother of the Moor’, Vixana keeps watch over the land, provides protection to travellers and offers peaceful entry to the Otherworld.

*New review on the journal* ⁠ In search of the f